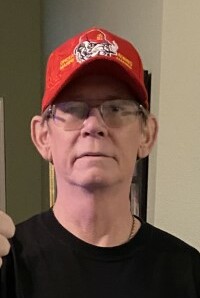 Please share a memory of Paul to include in a keepsake book for family and friends.
View Tribute Book

Paul Gordon Johnson Jr. “Pete” was surrounded by his loving family in his home when he went to be with the Lord on Saturday January 7, 2023.

Pete was born on July 19, 1964, to Paul Johnson Sr.  and Ann Benton while his dad was stationed in Okinawa, Japan. During his childhood years they traveled. Pete graduated from Permian High School in Odessa TX.

During his High School years, he worked at his dad’s shop and rode Bulls with his friends and also worked at a construction Co.

Pete enlisted in the Marines right after high school. After his military service he had a variety of jobs from racing cars, bull riding, driving a taxi, breeding horses, truck driving to Owning a Trucking Co.

Then he decided to go into sales. He sold things from cemetery plots to all types of cars and worked at Fun Town RV and Owned Johnson Family Insurance. His nickname was “Pistol Pete”.

Pete loved going to the races from Nascar, Drag Racing and Formula 1 Cars.  He enjoyed Bowling (He was on at least 2 Leagues at a time) Fishing and Baseball. Things he watched on TV were European Soccer, (Manchester City was his team), Nascar, Drag Racing, Football, Bowling, and Detective Shows, just to name a few.

Yes, Pete had stage IV Kidney Cancer, but that is not the way he would want to be remembered. We remember his wonderful personality, his quick wit, also his knowledge of history and cars…etc. His kindness and Love for God and Family.

Pete met Sharon Ensor in Oct 2008 on Christian Mingles and after talking on the phone for 2 weeks they met, and they both fell in love. On December 4, 2009, they were married, and they both have daughters and became one family.

He was preceded in death by his grandparents, Paul & Helen Johnson, William & Lilly Benton Sr.; and parent, Gary Wiley; along with numerous aunts, uncles, and cousins.

If anyone wants to thank a veteran, please donate to Tunnel 2 Towers and they help all Veterans. This is Pete’s request.