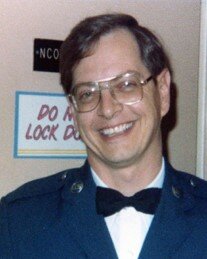 Please share a memory of Dennis to include in a keepsake book for family and friends.
View Tribute Book

Dennis Michael Halbert, 77, also known as Denny, went to be with the Lord on September 14, 2022, surrounded by his loving family, at his home in Burleson, Texas.

Denny was born at Fox Hospital in Oneonta, NY to James Bard “Jake” Halbert and Elma Linnie Lobdell on February 21, 1945. He attended schools in Otego and Frankfort, NY before the family moved to Florida when he was in the 10th grade. In ‘63 he graduated from Manatee High School in Bradenton, FL. He went to Manatee Junior College for a year studying drafting before joining the Air Force in 1965.

After bootcamp and weather observer school, Denny’s first assignment was at Eglin AFB where he met and married Terry Taylor in 1967. They had two beautiful children, Sheri Lynn and Michael Scott. As a Weather Observer, he was deployed for 6 months to the Azores. In 1970, he went to Chanute AFB, IL for Chief Weather Observer school and then was stationed at Mountain Home, Idado.  From there he went to more schooling to learn aviation meteorology and his next two duty stations were Pease AFB, New Hampshire and Eielson AFB, Alaska. In the spring of 1980, his  next assignment sent him to school in Holloman AFB, New Mexico. He became a member of a very small group of AWS Solar Observers which sent him to work at the Palehua Solar Observatory in Oahu, Hawaii. Dennis said Palehua was a, “Great Job. First time I wasn’t working a 24/7 schedule just sunrise to sunset.” (note KK found written by him in his files)

Dennis loved history and seeking knowledge. In Hawaii, he joined the Association for Research and Enlightenment (ARE), where he met Ona and Lani, Robin’s sisters. Ona introduced Dennis to Robin and they quickly hit it off. On Valentine's Day of 1982, Dennis married Robin Lee and added two more daughters to the family, Melisa Louise Wallace and Rebeka Nicole whom he later adopted.

In 1984, he was stationed at Scott AFB, IL to work at the only dedicated atmospheric sciences library in the Department of Defense. He retired as a Tech Sergeant with 21 years of service and requested to be moved back to Hawaii.  Kristin Michelyn was born a year later in 1986. After the military he worked for the Department of the Army in various IT roles, converting all military libraries in Hawaii from paper records to computers.  He always had a knack for technology, and was an early adopter of anything to do with computers or TV. In 1989, he received his Bachelors in Computer Science with concentration in Systems Analysis from Roosevelt University.

In 2005, he had the opportunity to take a job in Italy. At Caserma Ederle Army Garrison in Vicenza, he oversaw a Technical Support Group on the base. He and Robin hosted family and friends on many European trips. In 2010, after spending the max 5 year tour overseas, he came back to Hawaii and retired from civil service after 25 years. Kristin and Dennis lived together in the Mililani Mauka home and he would go to University of Hawaii Football games on Saturday with family and friends, Carlos, Sandy, Ona, and Steve, were some of the regulars. He especially loved eating and napping at the game.

Always wanting to retire on a farm, in 2014 he moved to Texas with Rebeka to fulfill that dream. They established Halbert Farm together taking care of horses, Kunekune pigs, zebu cows, chickens, and ducks. Dennis preferred duck eggs for breakfast. He also spent his time stamp and coin collecting.

In 2020, Dennis was diagnosed with a rare blood cancer called Myelodysplastic syndrome. He had to do chemo regularly and got many many blood transfusions over the next two years. The past two years would not have been possible without all the kindness of blood donors. Donating blood would be an excellent way to honor his memory. The family wishes to extend their gratitude to Dr Rohan Gupta and Nurse Kim from The Center for Cancer and Blood Disorders, and all the health care professionals who cared for him these final years.

He is preceded in death by his parents, Jake & Elma and cousin Tommy.

Dennis is remembered for his genuine smile, making others laugh, and his heart warming bear hugs.