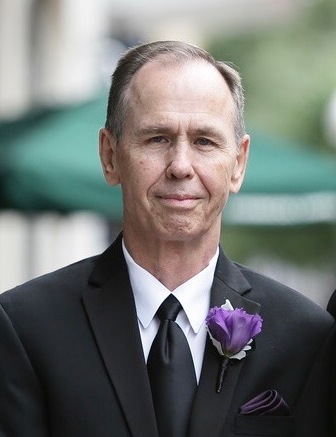 Please share a memory of Dennis to include in a keepsake book for family and friends.
View Tribute Book

Heaven gained a beloved son when Dennis O. Dees arrived at his eternal home on April 12, 2022. He never met a stranger and no doubt entered the pearly gates wearing his trademark smile, which could light up a room and make everyone feel included and welcomed. A joyful friend to all, he was a humble man who placed the needs of others before his own. Dennis found satisfaction in helping someone feel better about themselves, and a personal goal of his was to leave every situation better than it was before he had arrived.

Dennis’s love for God and his Christian walk were evident in all he said and did. He lived the Christian belief that we are Jesus’ hands extended.

Dennis was born in Glendale, Arizona, but lived in Fort Worth for most of his adult life. He served in the U.S. Navy aboard the U.S.S. Kitty Hawk. He was in medical sales for 35 years and after retiring, worked as a baker at Walmart.

He was predeceased by his mother, Mildred Dees; father, Clement Layton Dees; and sister, Donna Dees.

Memorial contributions may be made to Samaritan’s Purse, P.O. Box 3000, Boone, NC 28607 or at samaritanspurse.org.