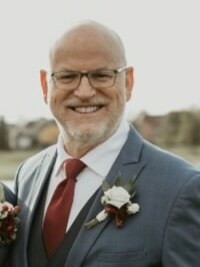 Please share a memory of Mark to include in a keepsake book for family and friends.
View Tribute Book

Mark Allan Elder passed away on Sunday, September 19, 2021, after a battle with prostate cancer. He was 60 years old.

Mark was born on November 2, 1960, in Fort Worth, Texas. He held a Bachelor’s Degree in Business Administration from Baylor University, and a Masters Degree in Theology from Southwestern Seminary.

Mark devoted his career to serving others as a Chaplain at Baylor Grapevine Hospital for many years. He also served as the Director of Spiritual Care and Clinical Ethics at St. David’s Hospital in Austin, Texas for close to a decade. He touched many lives in a significant way during this time, and he brought guidance and comfort to families throughout their toughest times in life.

Mark’s stand-out characteristic, other than service to others, was that of adventure. He had planned to spend the rest of his days at his remote desert hideaway, and traveling the country. He completed his desert retreat in spite of his cancer, but it kept him from his dream of traveling. Now he travels freely.

Mark is survived by his sons, Anthony (Michele) and Steven (Morgan), their mother Alison Galloway and a grandson, Anthony Jr. He is also survived by his mother Wynona Elder Fair (Marshall), and his sisters Carla Perry (Charlie) and Mona Figueroa as well as a niece and nephews. He was predeceased by his father, Carl Elder. His friends and family mourn his early departure from this earth.

A celebration of life service will be held at a later date.