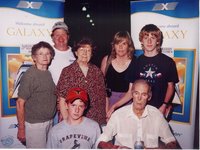 GRAPEVINE -- Marilyn Grinnell Chapman, 91, of Grapevine, Texas and formerly of Dunkerton, Iowa, died October 10, 2013. Marilyn was born on August 5, 1922 to Glenn and Queen Dunkerton Grinnell and was married to Merle W. Chapman for 63 years until his death in December, 2005. She graduated from State Teachers College (now Northern Iowa). Marilyn's life always involved helping people. While stationed in Florida during Merle's enlistment, she was recruited to teach school and later taught in local Iowa Amish schools. After her children were grown, she traveled the Midwest doing needlepoint demonstrations for Sunset Needlepoint. She shared her love of knitting with classes in her home, in the elementary school and with anyone she met who said, "I have always wanted to learn to knit". She designed knitting patterns, published two books and has a "story" that makes remembering how to knit very easy. She referred to herself as the "nutty knitter" and knit every day up to the last few weeks of her life. After moving to Grapevine in 1992, she continued her volunteering. She read to elementary school children, worked the VIP table for Festivals and was a strong supporter of the Grapevine Senior Activity Center. Attending the center almost every day, she formed a knitting and crocheting group to provide hats and blankets for a local hospital. Marilyn has been a part of the GrapeFest senior grape stomping team for a number of years and was named Grapevine Senior Citizen of the Year in 2007. She is survived by her son, Alan of Las Vegas, daughter LuAnn and her husband Jason Gatts and two grandchildren, Jordan and Logan Gatts of Grapevine. She is also survived by two nephews, Ross and Randy Jones of Waterloo and niece, Lori Blankenship of Minneapolis, MN. She was preceded in death by her husband in 2005 and sister Shirley R. Jones in 2009. Marilyn had an enormous impact on so many people's lives. She always had a smile on her face and was willing to help any way she could. She loved her family, was the most amazing mom and never had an unkind word for anyone. She will be missed. Per her wishes, there will be no service. Memorials may be directed to the family at 3712 Lakeridge Drive, Grapevine, TX 76051. They will be used to further historical preservation projects at the Dunkerton Library. Martin Thompson & Son Funeral Home Fort Worth, 682-841-1221