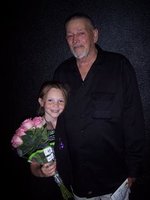 Steve York, 67, was called home by our Lord and Savior on Saturday, May 24, 2014. Steve was born on September 23, 1946 in Dallas, Texas to Raymond and Vonda York. He was the eldest of three children. Steve met the love of his life, Janie Butler, and they married January, 13, 1968. He proudly served as a Sergeant in the United States Air Force during the Vietnam War. He owned several small businesses throughout his life but was best known for owning York's Wrecker Service in Red Oak. When Steve wasn't working and providing for his family, he enjoyed anything that had to do with cars, from classic cars to hot rods. Steve included his family in his hobbies. When they were young, they all enjoyed watching Steve and his wife, Janie, race mud trucks. He enjoyed cruising in the cars that he restored and even built his own Rat Rod. He participated in numerous car shows and received several awards. Steve also loved fishing and archery and was proud to have shot a "Robin Hood." He had a great sense of humor and a selfless heart. He will live on in the hearts of his family and friends. Steve was preceded in death by his father Raymond York. Steve was a loving and devoted husband, father, grandfather, son, brother, and friend and is survived by his wife of 46 years, Janie York; sons, Carl York, Raymond York and his fiancée, Jackie; daughter, Stacey White and her husband Billy; grandchildren, Kameron White, Gavin Smith, Hailey York and Abby White; mother, Vonda York; brother, Gary York; and sister, Shirley Merrick and her husband Bill, and life-long friend Andy Marceleno, along with numerous extended family members and friends. Service: 2 PM Thursday, May 29, Empowering Word Christian Center, 118 S Hwy 342, Red Oak, TX 75154. Visitation: 1 - 2 PM Thursday, May29, Empowering Word Christian Center. Interment will be at a later date, Dallas Fort Worth National Cemetery. In lieu of flowers, the family requests that memorials be made to Empowering Word Christian Center.