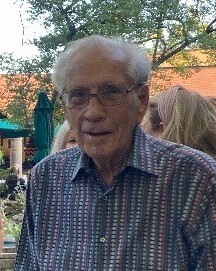 Alvin Lee Martin departed our world for the Kingdom of Heaven on October 8, 2022 at his home in North Richland Hills, Texas.

Born on September 16, 1929 in Holliday, Texas, Al was accomplished at anything he set his hand to.  He was a deacon at Open Door Assembly of God and a pillar in his community of Odessa, Texas until his family moved to the metroplex.  He was a board member at Life Fellowship Church in Hurst where he served as a Small Group Host and Senior Adult Coordinator with his wife, Ruth for many years.  Al is survived by his lovingly children: Mary Ann Davis, and her husband, Wayne; Darlene Howl, and her husband, Butch; and Ricky Martin, and his wife, Micki.  His grandchildren, Chris Gildon, his wife Autumn and their children, Anna and Alex; Ambyr Davis Greer, her husband Andrew and their son, Davis; Heather Rodriguez, her husband Alcides and their children, Evan and Anna; Daryl Martin; Matt Gildon, his wife Shandel and their children, Chloe and Logan, will carry his strength, devotion, love and his countless lessons on for generations to come.

Al to Ruth and his friends, Daddy to his children and Papaw to his grandkids, was the strongest man we knew with a touch as gentle as butterfly wings.  As his grandson, Chris, once said, “he’s the only man I know that was gentle enough to have the fish from his pond come nibble on his fingers, but was strong enough to outwork the toughest of men.”  He was a self-taught carpenter, electrician, engineer, domino extraordinaire, you name it.  He taught our family how to build, rewire and generally fix anything.  We’re all capable, self-reliant human beings thanks to him, but most importantly he taught us what great love looks like.  He led by example and showed us how to be a man of God, the greatest father, grandfather and great-grandfather, friend and above all husband.  He was married to Ruth Martin for 69 years.  Letting him go is seemingly impossible, but there is great joy in knowing Al and Ruth are in each other’s arms again under the loving eye of our savior.  As promised, we’ll meet you there someday.

The service will be followed by a graveside ceremony at Bluebonnet Hills Cemetery where Al will be laid to rest next to Ruth.