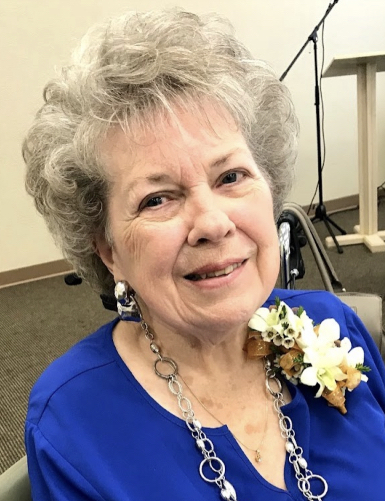 Heaven became a lot louder and a little smarter on September 30, 2022, as Sherry Faye (Martin) Campbell finished her race after a courageous twelve-year battle with Parkinson's Disease. Sherry is survived by her loving, Godly husband of 54 years, Donald; a brother Tony and wife Donna, of Whitehouse; three sons: Christopher (the funniest) of Howe; Jeffrey (the handsomest) and wife Aundrea of Weatherford; and Gregory (the wisest) and wife Kristin, of Aledo; a special niece, Kim Bentley, of Mansfield; nine grandchildren; five nephews; scores of friends; and hundreds of former students whom she loved as her very own. She was preceded in death by her parents, Billy Joe and Glenna (Shelton) Martin; a brother, Gerald "Rocky" Martin; and her adopted sister Darlene Ashby.

Sherry burst on the scene August 6, 1943, in Greenville. Sherry grew up in Fort Worth and was a proud Polytechnic Parrot, Class of 1961. As a Parrot she was active in the band and the school newspaper, and she could twirl a mean baton. She served as an active member of the Poly Alumni Organization until her passing. She attended Abilene Christian College, then earned both a Bachelor's and Master's in Education from TCU. Sherry loved her Horned Frogs.

Sherry began her teaching career at Handley Middle School, then taught at Trimble Tech High School before serving her sentence as a mother to three knuckleheads. But she couldn't ignore her calling to teach and began her twenty-three-year career at Southwest Christian, where she taught History and served as Cheerleader Sponsor. She also served as interim Principal before concluding her career as the school's Guidance Counselor. Her love for history was limitless, but it did not compare to the love for her students. They were more than her students - they were her children.

After retiring, one could find Sherry gardening, traveling with her husband, shopping for antiques, scrapbooking, researching her family history, trying new recipes, and constantly encouraging people with handwritten notes.

Sherry was also a doting grandmother, who prided herself in each grandchild's accomplishments. While Parkinson's robbed her of her mobility, it did not take away her love for watching them sing, act, dance, run, write, draw or dribble. It also didn't prevent her from giving random History tests during family Christmas gatherings, or from whopping them in a mean game of Trouble or Yahtzee.

Parkinson's also didn't steal her love for people. Sherry could be routinely found at a Bible study, working with her Poly Alumni Group, distributing Fruit Snacks to children after Sunday worship, or spending time with the Wacky Women of West Berry.

For 54 years she wore the name Campbell proudly with her husband. Together they raised three sons and influenced the lives of countless others as members of the Altamesa Church of Christ. They tirelessly served one another, just as God intended.

Sherry's final exam will be Saturday, October 8th at 1:30pm at the Altamesa Church of Christ. It would be wise to bring a #2 pencil and a Scantron - Mom always liked a good pop quiz! In lieu of flowers please consider a donation in Mom's name to Southwest Christian School or the charity of your choosing.