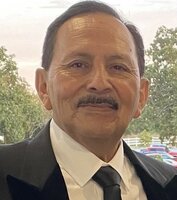 Johnny Louis Carrizales, 64, passed away Sunday, November 7, 2021. Funeral: 11 a.m. Saturday, November 13, 2021 at One Faith Church, 1200 Roberts Cutoff Rd., River Oaks, Texas 76114 Visitation: 6 to 8 p.m. Friday, November 12, 2021 at One Faith Church. Johnny was born in Natchitoches, Louisiana on February 4th, 1957. He married the love of his life, Jackie Carrizales on March 24th, 1983. They were married for over 37 years and had three daughters, and gained three sons, and was Blessed with 12 beautiful grandchildren. Johnny worked for the City of Fort Worth for many years before his retirement. Johnny came out of retirement and began working at Lily B. Clayton, as a school crossing guard, alongside his wife. There they both took pride in their roles as crossing guards. Even after the love of his life went home to be with the Lord last November, he stayed strong and committed to his duty as the crossing guard. Johnny always had a smile on his face and was full of laughter and joy all the time. Johnny attended One Faith Church faithfully, and was always ready to worship, there was no other place he would rather be than at church. Johnny was close to each one of his grandchildren, daughters, and son in laws. Johnny was that grandpa (Papo) that would do anything for his grandchildren. Around them he always had a joyful spirit, joked around and did his special dances with them. He was always ready to give a helping hand wherever needed. Johnny touched many lives whether family, friend or even complete strangers. Johnny will be greatly missed, but we find peace knowing that he is now rejoicing with the love of his life again. He was preceded in death by his wife, Jackie Carrizales; his parents, Donaciano and Leonora Carrizales; his sister, Francis Banks; and his brother, Tino Garcia. He is survived by his daughters, Jennifer Orozco and husband Ruben; Crystal Chabvuta and husband Nyasha; Amanda Castro and husband Daniel; sisters, Josie Carrizales and Delores Carrizales; brothers, David Carrizales, Steve Carrizales, and Albert Carrizales; grandchildren, Maribel, Angelique, Destiny, Klarrisa, Malachi, Aniyah, Naomi, Lilliana, Caleb, Joshua, Leslie, and Hannah; and many other relatives and dear friends.