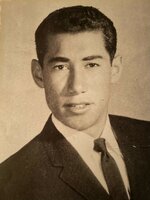 Victor Torres, 74, passed away on November 1, 2021. Visitation: 6 pm – 8 pm Monday, November 8, Thompson’s Harveson & Cole Funeral Home, 4350 River Oaks Blvd, River Oaks. Service: 10 am Tuesday, November 9, St Patrick Cathedral, 1206 Throckmorton St, Ft. Worth. Interment: Laurel Land Memorial Park. Victor was born May 5, 1947, in Junction, TX to Herbert Torres Sr and Audelia Torres. He was a 1966 graduate of Junction High School where he was a football and track athlete. Victor attended a Business College in Austin. He met and married his wife of 54 years at a dance in Junction. Victor was the founder of several companies including the Capri Campers, Capri Pallet, Capri Lumbermill, Capri Sand Pit and a yard for truck parking. He had a love for trucks, heavy equipment and anything related to Texas. Victor was a man of faith and a firm believer of God. He was a business intellect and a strong negotiator. He was also a social butterfly and not afraid of conversation. He loved gifting food to anyone and everyone, bringing boxes of donuts or bags of tacos. Victor loved to make sure that everyone around him was well fed and taken care of. He loved to sit with his family and watch western movies. Victor Torres was self-made millionaire of hard work and discipline. A man who was an entrepreneur who set himself a bar above mountains and rose above them with his brilliance and bravery. With his faith in God, he became a man of respect and integrity. From a small farm town boy to a owning a home in Texas Monthly. Humble in his accomplishments as gifts from God for his family. Perceiving them to be gifts for the family to come after him. To know that they will be taken care of. A person to lead by example. He was a man with the shoulders of a mountain upon his back. He would dirty his hands in hard work, the first to arrive before the light of dawn, and the last to leave after the sun has long set. He is preceded in death by his Father, Herbert Torres Sr and his brother Herbert Torres Jr. Survivors; Wife, Gloria A Torres; Mother, Audelia Torres; Sons, Victor Torres, Jr and wife Audra, Craig Torres Sr and wife Delores, and Lawrence Torres Sr; Ten Grandchildren, Seven Great-Grandchildren and one more on the way; Sister, Gloria Beth Torres; Brother, Emilio Torres; and a host of extended family and friends.