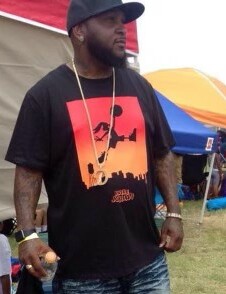 Earnest Deontae "Dee" Anderson, 43, passed away September 20, 2021, Funeral: 11 a.m. Saturday, October 2, 2021, at Thompson's Harveson & Cole Funeral Home, 4350 River Oaks Blvd., Fort Worth, (River Oaks), Texas 76114. Visitation: 6 to 8 p.m., Friday, October 1, 2021 at Thompson's Harveson & Cole Funeral Home, 4350 River Oaks Blvd., Fort Worth, (River Oaks), Texas 76114. Earnest Deontae "Dee" Anderson, "Dee" as he was called, was born to the proud parents of Earnest Rayford and Mary Anderson in Tallulah, Louisiana, where, at an early age, he attended the public schools in Tallulah. As his paths in life unraveled, Dee, along with his parents, and three other siblings, relocated to Fort Worth, Texas in 1988, where he attended the FWISD. Throughout his life Dee was employed on varies jobs to provide for his children. He enjoyed things like fast cars, going to track meets, and hanging out with his siblings and friends. Dee was known as the life of the party, and you were always guaranteed to get a good laugh, as he loved to highside, tell jokes, and was always playing pranks. On March 1, 2019, Dee was involved in a serious automobile accident, which left him having to learn life's basic skill all over again. With the help of God and his companion Erica Turner, and his daughters, Brianna and Tayla, he had recovered to about 85% back to his old self. On September 20, 2021 the Lord beckoned him home. He was preceded in death by his maternal grandparents, Alex Moore, Beatrice McGee, and Willie Clark; paternal grandparents, Dave and Mary Rayford. Left to cherish his precious memories are: His companion, Erica; Ex-Wife Kaisha; his children, two ride or die daughters, Brianna and Tayla; Ke'Oundria, Ruben, Jada, Daylon, Darius, Eric, Tatiana, and Taj; 3 grandchildren; his parents, Earnest Rayford (Deburah), and Mary Anderson Harris; his siblings, Beatrice (Stevie), Avion (Summer), Rodricos (Princess), Keisha, Tiarra, and special brother, Derrick Daniels; and a host of nieces, nephews, and other family and friends who loved him dearly.