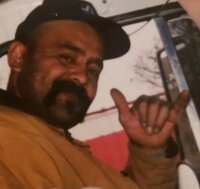 On September 19th, My Father, a warrior throughout life, Tanu Liava'a Atuatasi passed away into God's graces at the age of 60. Tanu was born in Honolulu, Hawaii to Manuia Loa & Liava'a Atuatasi, both from American Samoa. After graduating from Farrington High School in 1979, He joined the United States Navy when he met Susan Demain, they married in 1992, even though it was short they had a daughter together, Mary Atuatasi. Throughout the years, He and his daughter were inseparable, where Tanu went so did she, they were best friends, each others world until Mary gave Him 2 beautiful Grandchildren, Ryan and RyLeeAnn whom he lived everyday for. You could find Tanu smoking a fine cigar or working hard as a truck driver for Cross Road Trucking INC. He was preceded in death by his Father, Mother, sister June, And his brothers Neri & Meni Atuatasi. He is survived by his siblings Samson, Nelson, Houston, Josephine, Susan, Sione, & Benjamin along with their spouses he had many nieces and nephews. He also leaves behind the true Loves of His life Mary, Ryan, and RyLeeAnn. Tanu was the most selfless person you would ever meet, He would give the shirt off his back. You will truly missed Dad you will forever be my Hero, My best friend and the best Papaw in the world. I love you daddy. Funeral: 10:00 a.m. Thursday, October 14, 2021, at Martin Thompson & Son Funeral Home, 6009 Wedgwood Dr., Fort Worth, Texas 76133. Visitation: 6:00pm to 8:00 p.m., Wednesday, October 13, 2021 at Martin Thompson & Son Funeral Home, 6009 Wedgwood Dr., Fort Worth, Texas 76133.