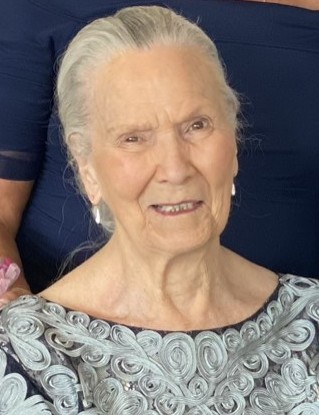 Virginia Frazee McAnally went home to Jesus on July 21, 2021 in Fort Worth, Texas. Frazee, as everyone knew her, was born to A.B. and Pearl Pointer on January 29, 1937 in Pecos, Texas. She was the youngest of four children. She grew up and completed High School in Pecos making many lifetime friends along the way. Frazee met her husband, W.C. McAnally, in Pecos and married him on September 5, 1955. They lived in Alpine for a short period while W.C. finished college before moving to Fort Stockton where they made a home for 60 years. They had two children Deidra and Mike. Frazee was a member of The First Christian Church, and worked at various jobs in Fort Stockton while raising her children, she made many friends, and enjoyed going on trips with her family, grandchildren and great grandchildren. W.C. And Frazee moved late in life to Weatherford, Texas. Frazee is proceeded in death by her husband, W.C., her parents, her brother Neil, and her sisters Jane and Mary. Frazee leaves behind her daughter Deidra and her husband Kevin, her son Mike and his wife Janee, grandchildren Cade, Lindsay, Cole, Krystle, Brad, Christopher, Zachary, Joshua, John and Callie, and 12 great grandchildren. Frazee's desire was to not have any public services after passing, only a private family ceremony at South Padre to celebrate her life. In lieu of flowers, we ask that anybody wishing to make a donation to send them to Community Hospice of Texas, 1111 Summit Ave., Fort Worth, TX 76107, 817/870-9995 who cared for her in her final days.