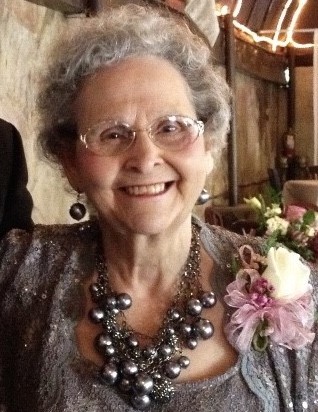 Burba Jane Thornton went to be with the Lord on June 3rd, 2021 at her home in Keller, Texas. She was born in Saratoga, Texas on January 24th, 1933 to Jesse Elias Jordan and Margie Elizabeth (Collins) Jordan. She was one of eight children. Burba was preceded in death by three sisters and four brothers: Clara Davin, Hildred Barton, Jack Jordan, Nancy Mullins, Jesse Jordan Jr., Dick Jordan, Sammy Jordan; and one daughter, Cathryn Jane Thornton. Those left to cherish her memory are her daughters, Debra Thornton White and Marcie Ellen Watson, seven grandchildren: Brittani Huffhines (Jerrod), Meagan Gaessler, Rheanna Gaessler, William Gaessler (Jackie), Brian Stephens (Jeannie), Brandon Stephens, Bradley Lungwitz; nine great grandchildren, one great, great grandchild, and numerous nieces and nephews. Burba was known as “Nanny” to her grandchildren and was best known for her beef enchiladas, playful head-bob, and Egyptian dance moves. She could fold the tip of her tongue over a pencil and bring it to her mouth like a frog catching a fly. She enjoyed family get-togethers and laughter, and was always complemented for her friendly smile that she shared with everyone she met. Burba loved the Lord, talked to God regularly, and had a wonderful moral compass. She enjoyed video calls with her friends from Deaf Action Center (DAC) and the Texas School for the Deaf. Burba liked sewing on plastic canvas - making Kleenex box covers and drink coasters, as well as embroidery. For part of her later life she lived at the DAC (Martha’s Vineyard Place) where she enjoyed outings and senior activities such as dominoes and bingo. Most recently, while living with her daughter Marcie, she enjoyed the challenge of word searches and large jigsaw puzzles that she would often complete in less than two days. She will be missed by many and her memory will live on in our hearts forever.