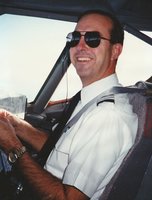 Stephen Graham Boozer, Lt.Col.(ret) USAF Stephen Boozer, 74, unexpectedly took his final flight at his residence in Fort Worth, TX on Sunday, April 25, 2021. Upon graduation from the School of Aeronautical Engineering at Auburn University, he began a 20-year career with the USAF. A pilot, he spent most of those years flying KC-135 aircraft. Following his retirement from the Air Force, Stephen continued his love of flying and began a second career as a commercial airline pilot with Southwest Airlines. Flying until the FAA mandated retirement age, Capt. Boozer continued with Southwest as an instructor in their Pilot Training Center. Stephen is survived by his wife of 50 years, Peggy Boozer (nee’ Entrekin), his daughter Stacey Boozer Cribbin of St Louis, MO, his son Brannon William Boozer of Katy, TX, and four wonderful granddaughters: Taylor Anne, Paige Danielle, Madison Claire, and Layne Elizabeth Cribbin. Special additional family members, Michael Kniepman (Stacey) and Jack Schwarze (Paige), both of St Louis, MO. Steve loved sunsets and gin gimlets, dinner and drinks with friends, family gatherings by the outdoor fireplace, and last, but not least, flying in the left seat of Boeing 737. Graveside service with military honors will be held at Dallas-Fort Worth National Cemetery on June 10, 2021, at 3:00 p.m. In lieu of flowers, the family requests, in remembrance, a contribution to the charity of your choice and a toast at sunset to a life well-lived.