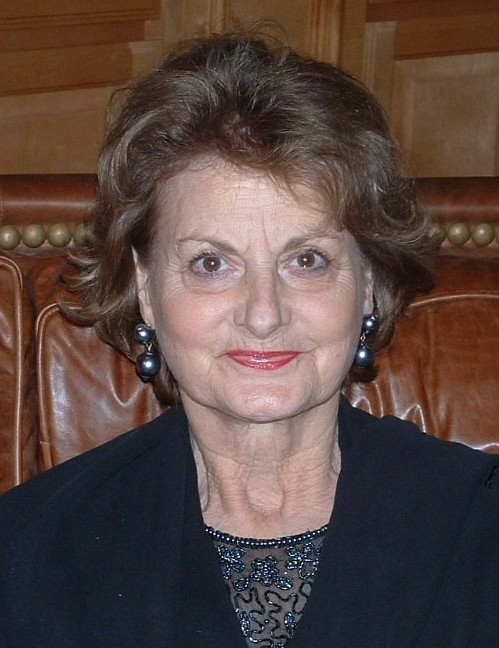 Elpida (Elpis) Bakintas Peters passed away March 21 at age 84 with family and friends by her side. She was born December 15, 1936 in Iraklion, Crete, Greece to Malama and Konstantine Bakintas. Elpis was one of six children. She is survived by her sister Anna, her brother Diogenese, two children, Athena Wiginton and Paun Peters, four grandchildren, and five great grandchildren. Elpis was a child of the great depression and post war devastated Greece. She worked alongside her siblings, parents, and grandparents in mostly agrarian employment raising grapes and sun-drying to make raisins. A graduate of the Emporiki (commercial) school of Iraklion with honors, her true passion was dance as she was adept at tango, waltz, ballo, and syrtaki. As she matured into a young woman her striking beauty gained her the coronation as Miss Crete and Queen of the Night at the Crete Debutante Ball hosted by the Ntore Hall in March 1954. She later caught the eye of a dashing young Greek American named Damianos (Dan) Peters who was introduced to her by a close relative. She relocated with him to Fort Worth following their wedding in Athens in 1955. Bearing her first child at age 19 she quickly picked up English and learned the American Way, very much supported by U.S. relatives and the many friendly Texans she came to know. While learning English she attended Beautician School and became the neighborhood favorite hairdresser. She was very much the happy homemaker often seen singing as she did chores and gazing out her kitchen window. After bearing a girl as her second child (known as Athenoula) her life was complete. During many a trip around the country, and around the world, and back to her homeland, she always exuded grace and elegance. In the 1960s, when dressed a certain way and with hair styled just right, she would often be mistaken for the Italian beauty, Sophia Loren. Alongside her beloved Dan, they constructed two Greek Architecture inspired homes, one in Bedford, and one in West Fort Worth. Elpis was quite proud of these homes. Being the clever hostess, she hosted many gatherings of fellow Greeks, friends and relatives alike, political and social events, and receptions for her children and grandchildren. With a zest for life that was unparalleled, she will always be in our memory as the life of the party and the first one on the dance floor, a great mom, and our “Cool Yiayia.” Elpis survived her dear Dan by almost 25 years. We pray she is now in the Lord’s Kingdom and is reunited with her beloved Dan and all her departed family. May her memory be eternal. In lieu of flowers, the family has requested donations to be made in her memory to the Alzheimer’s Association (alz.org/northcentraltexas), or to either of her two home parishes, St. Demetrios Greek Orthodox Church in Fort Worth and St. John the Baptist Greek Orthodox Church in Euless.