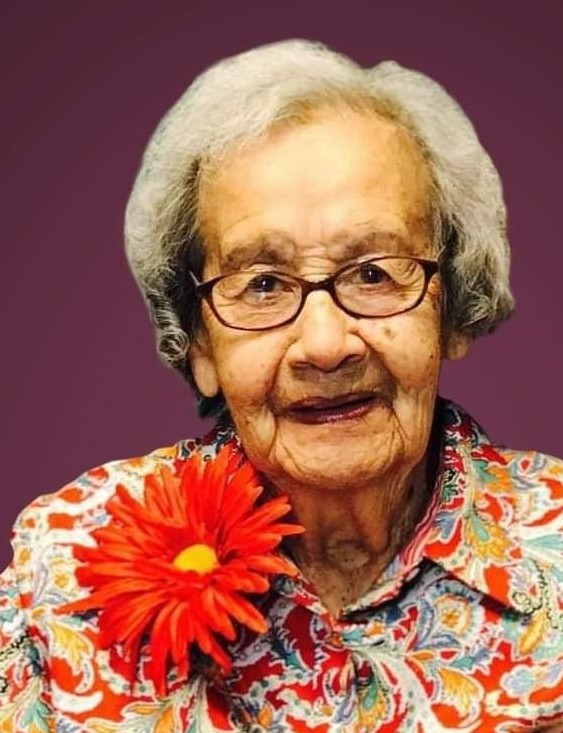 In Memory of Anastacia Aguilar Cantu 1928-2020 Obituary of Anastacia Aguilar Cantu of Fort Worth, Texas. Anastacia, Anna, Mom, Mamo, Tia, Tia Tachita, Tacha, gained her angel wings of natural causes on November 10, 2020 at home with her family by her side. Anna was 92 years old. Mass service will be at Saint Augustine Catholic Church 100 2nd Street, Moore, Texas 78057 November 28, 2020 at 9:00 AM Graveside Service to follow at Moore Catholic Cemetery. Anna was born on September 10, 1928 in Millersview Texas, the daughter of Francisco Aguilar and Catarina Aguilar. Anastacia was proceeded in death by her husband, Simon P. Cantu whom she married on September 21, 1946; Simon was the love of her life for 40 years. They were married at Saint Augustine Catholic Church in Moore, Texas. Also proceeded in death by her parents, Francisco Aguilar and Catarina Aguilar and three brothers, Andres Aguilar, Edwardo Aguilar and Julio Aguilar. Anna is survived by her daughter Dora Cantu Castor and grandchildren, Arthur Castor, Jr., Michael L. Castor (wife) Kimberly Castor, Carrie L. Castor Reyes (husband) Johnny Reyes; great-grandchildren, Emily M. Castor and son Rylee R. Rangel, Jennifer L. Castor, Amy A. Trevino, Gilbert (Bubba) Rosales, Mia A. Rosales; extended grandchildren and great-grandchildren, with many nieces and nephews. Last but not least, her pups, her furry loves which she loved so much; they were by her side to the end, Cinco & Ruger. Anna was an entrepreneur, they had an import and antique store in Wellington, Texas and Higgens, Texas. She was a very talented seamstress which every one of her grandchildren sat with her at her sewing machine. They went fishing, camping, and did crafts together. Anna could shoot a rabbit with her .22 rifle at a distance and not miss. She could lay a tile floor, paint walls, she made quilts for every one of her grandchildren and great-grandchildren; and the very last one she made was for Rylee R. Rangel, he is 4 now and still carries his blanket. We love you, Mom, Mamo, we will carry you in our hearts till the end of time.