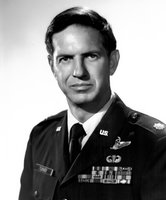 Louis Wendell Turner of Fort Worth, TX died October 16,2020. He was born September 27, 1938 to Travis Dawson and Lillie May Turner in Akron, Ohio. After graduating from Central High School in Akron, Wendell earned his bachelor’s degree from The University of Akron. He later attained a master’s degree from University of Southern California. Wendell served in the United States Air Force upon graduation from The University of Akron. He completed pilot training and flew both the F-100 and F-4 fighters. He retired as Lt. Colonel and during his flying career earned many awards including the Distinguished Flying Cross and numerous Air Medals. After his Air Force flying career he took his experience and passion for aviation and joined the Engineering Department at Lockheed Martin, Fort Worth, where he was a highly valued engineer for many years, working in the F-16 Pilot-Vehicle Interface Group among others. From breaking records as a student athlete to marathons as an adult, Wendell was a dedicated runner his entire life. Upon retirement he was able to devote more time to other interests, including photography. Wendell was active in The Cowtown Camera Club and enjoyed improving his craft. Throughout life Wendell and Sonja made wonderful memories together during their many travel adventures. Wendell is survived by his wife Sonja, daughters Sharon Castros, (Frank), Karen Bunner, Crystal Nini, (C.J.), son David Turner and daughter Laura Turner Crump (Ryan) and 9 grandchildren and 13 great grandchildren. He attended Saint Andrew Catholic Church. Due to the pandemic there will be no services. An interment at the Dallas-Fort Worth National Cemetery will be held at a later date. In lieu of flowers, donations may be made to the Saint Vincent De Paul Society or the Fort Worth Symphony Orchestra.