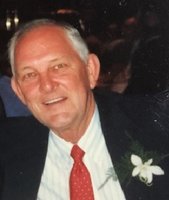 John Wesley Smith (Jim, J.W., Brother, Pawpaw) John was born in Sweetwater, Texas on September 4, 1926, and passed into his heavenly home September 28, 2020. At the age of 3 his family traveled in a wagon and relocated to Sulphur Springs, Texas; he was the youngest of 3 children. As a youth he sang in his Baptist church choir, was a Boy Scout and accepted Christ as his savior at a tent revival. An early job that he held was delivering newspapers while riding on his horse backwards. At age seventeen John joined the Navy and served in WWII as a radar operator on the USS Harding, a destroyer/minesweeper. It was during this service in the Pacific theater that he survived an enemy airplane hitting his ship. The Harding was attacked with other ships by four kamikazes. One was driven off, another shot down, but a third flew directly for the Harding's bridge. As gunfire ripped into the aircraft it splashed close on the starboard side, tearing a huge gash from keel to main deck in the Harding's side. Then the plane’s bomb exploded taking several lives. John was honorably discharged and received three commendation ribbons: the Asiatic-Pacific Campaign Ribbon (1 star), the American Campaign Ribbon and the Victory Ribbon, all of which are no longer awarded. John held a degree in Applied Mechanics from East Texas State College, now ET A&M, and an LLB law degree. After college he taught construction practices to men coming out of the military. Around 1949 he moved to Dallas, Texas, and began a 30-plus year career with State Farm Insurance Company. There he met the love of his life, Gloria, whom he would later marry. Before retiring, John reached a career goal of divisional claim superintendent with State Farm Insurance. After retirement, he and Gloria enjoyed serving the less fortunate and volunteered at the First United Methodist Church of Fort Worth in the infant formula distribution program. He enjoyed camping, hunting, fishing, barbecuing, and golf. He became quite the expert at woodworking and was once featured in a west Texas newspaper article for one of his creations. John was a Boy Scout Master and coached his son’s baseball teams; he was a good man, a great father and enjoyed spending time with his family. Frequently, he and his family would take early morning treks to White Rock Lake in Dallas where he would prepare delicious campfire breakfasts while the family watched the sun come up. He had a love for animals and after purchasing a country getaway, he adopted donkeys from the Grand Canyon through the Bureau of Land Management program. Throughout his life, John always had a dog by his side and enjoyed working with them in obedience training. He became a dedicated “landlord” of purple martins, learned all he could about these beneficial birds and even appeared on an early morning news show in the DFW area to share his knowledge of this “hobby.” John was also a devoted Cowboy’s fan. In the '60s when games were blacked out locally, he put up a giant antenna in his yard to watch games broadcasted from Waco. John was an avid golfer for many years and even sank two holes-in-ones during his life; a feat few golfers experience even once. He had a keen talent for woodcarving in his later years and taught a carving class for several men while in his seventies. At Christmas, the family could always count on receiving at least one of his new, hand-carved ornaments. He generously gave his carvings to friends and family as gifts or as a gesture of appreciation. His culinary talents were also much appreciated and his brisket and smoked ribs became famous among family and friends. John was preceded in death by his parents Ray and Gladys Smith, his brother William Smith and his sister, Shirley McIntyre. Survivors are his spouse Gloria G., his daughter Kimberley and her husband Lester Bowers, son Stephen and wife Karla, grandson Jonathan Aaron, great grandson Christian A. and nephews Mike Smith, John, Tommy and Dale McIntyre and their families, all in the DFW area. Memorials: In lieu of flowers, donations may be made to Peaceful Valley Donkey Rescue, Miles, TX 76861 or the National Heart Association. Because of Covid no celebration of life is planned at this time.