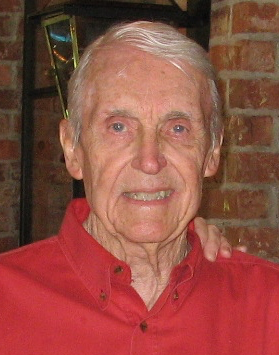 John (Jack) Charles Ward passed away on July 21, 2020 at age 95. He was born in 1925 in Denver Colorado to John C Ward and Genevieve Clark. Jack attended school in Denver, graduating from North Denver High School in 1943 where he first discovered his love of airplanes and engineering. He enlisted in the US Navy where he became a Naval Aviator in 1946, landing airplanes on aircraft carriers before simulators were used in training. At the time of his death he remained one of the last living World War II veterans, a fact he was forever modest about. He returned to Colorado after World War II and attended the University of Colorado, graduating with a Bachelor of Science degree in Aeronautical Engineering. He was fortunate to meet his beloved wife Eunice Young from Highland Park, Michigan after she and a friend took a brave cross country adventure to Colorado for summer jobs, married her in 1950 and their fruitful partnership lasted over 60 years. Eunice died in 2016 and Jack was her faithful supporter throughout her extended final illness. Jack was employed in the aerospace industry in Fort Worth, Texas, Dayton, Ohio and Greenville, Texas over a period of 40 years and was involved in the design of many important forms of air transport from jets to helicopters when he retired. He and Eunice moved back to Fort Worth, where they had raised their daughters and so enjoyed playing tennis and socializing with friends together. They enjoyed traveling as well, including Ireland where Jack visited the home of his own ancestry. Jack is survived by his adoring daughters, Jeanine and Janet Ward, Marilyn Zindel and spouse Jeff Zindel, Carol Greenia and spouse Michael Greenia, as well as his grandchildren, Devin Ward, Jeffrey, Brady and Douglas Deskin, Nicholas, Chad, and Jessica Zindel, Haley and Blake Greenia and Genevieve DeLaigle as well as 8 great grandchildren. He is preceded in death by his dear wife Eunice as well as his sister Joann Ward and his granddaughter Megan Shell. He will be buried next to his wife at Dallas-Fort Worth National Cemetery with military honors sometime in 2021 when it is safe to travel. Because not only Jack but so many others have been affected by COVID19, the family is asking that donations go to The Giving Back Fund at https://www.gofundme.com/f/GivingDignity who raises money to buy tablets to place in hospitals to give family members a chance to say goodbye to patients who are critically ill and in quarantine.