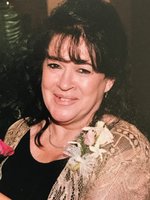 Cecelia Ann Gillinger, went to be with her Lord Jesus on July 15, 2020 Cecelia was born to Cecil and Muriel Tidwell on July 5, 1946 in Jasper, Alabama. She was the only daughter of four children. Her brothers were Tom, Bob, & Terry. They lived on a family farm that they all worked. They then moved to Chicago for many years. There she met and married Raymond Gillinger, the father of their seven children. They moved to Arizona. Cecelia settled her life in White Settlement, Texas. She cleaned houses for a living. Her children, grandchildren and great grandchildren were her entire life. She had the greatest love & faith for her Savior Jesus Christ. She walked everywhere, loved to read, was an amazing story teller, & animal lover. She loved to laugh & be with family more than anything. She was the most caring, selfless, woman of faith you would ever meet. Cecelia was preceded in death by her parents, Cecil & Muriel Tidwell and her daughter Kerri Gillinger and her baby miscarried, and her brother Terry Tidwell, aunts and uncles. She was survived by her brothers, Bob and wife Brenda Tidwell of Newark, TX. and Tom and wife Mona Tidwell of Winfield, AL. and her sister in law Linda Tidwell of Saginaw, TX. Children, son Ray & wife Vanessa Gillinger of Grand Prairie, TX., son Richard & wife Pamela Gillinger of Ft. Worth, Tx., son John Gillinger of Ft. Worth, TX., daughter Billie Jo & husband Tom Wineteer of Prosper, TX., son Erin Gillinger of Ft. Worth, TX., and daughter Tamara Gillinger of Palm Bay, FL. Grandchildren, Chelsey, Brooke, Keaton, Kirstin, Cherish, Marisha, Katelyn, Emma, Ashton, Preston, Ryan, Makala, Blake, Hannah on way. Greats, Ethan, Layani, Kashton, Letti, and Kirstin’s on way. Private family viewing at Thompson & Son Funeral Home. Memorial service, private family service at later date.